The signing ceremony was witnessed by the Customs Management team. 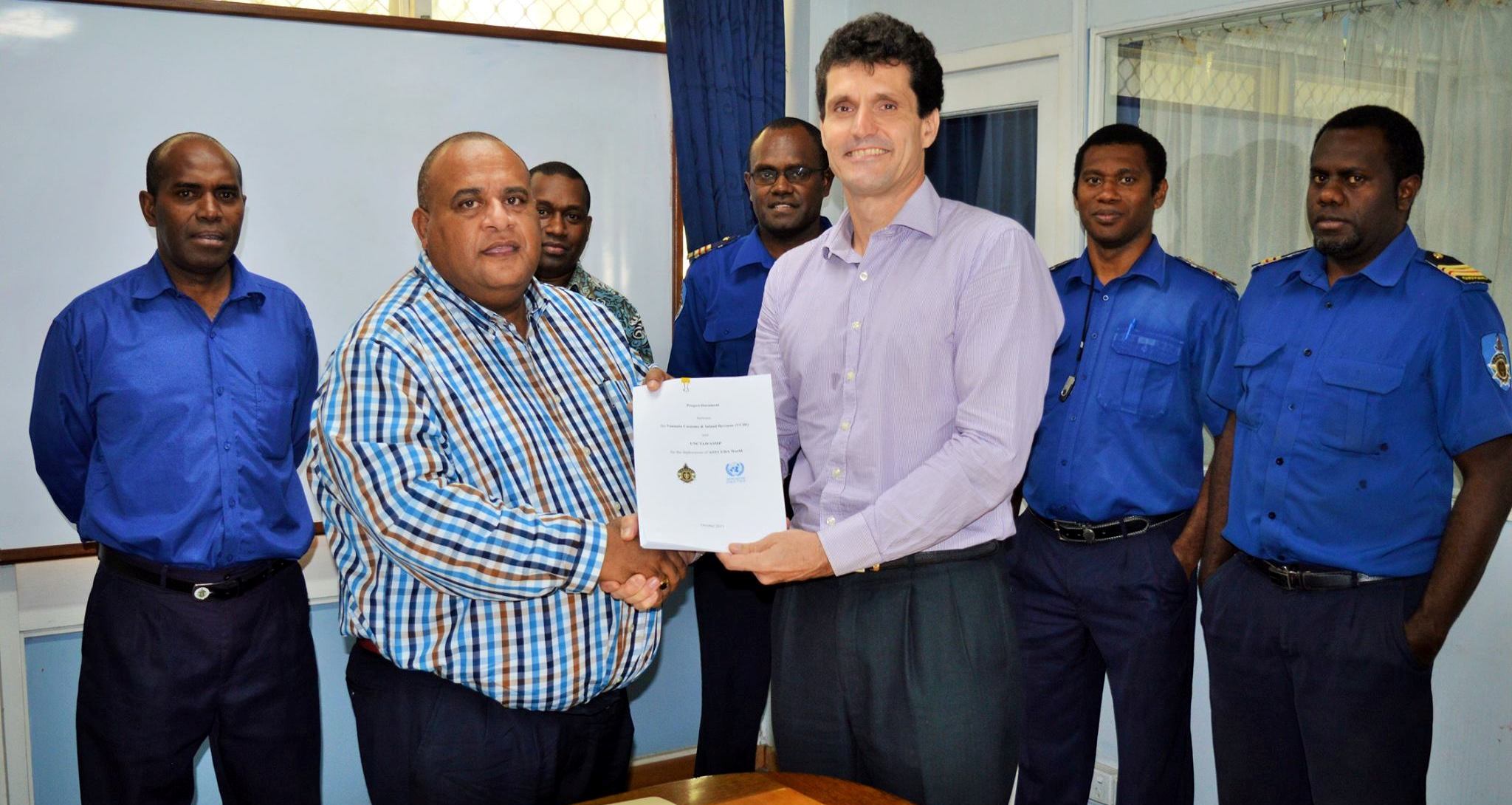 This vt90million project has been approved by the Ministerial Budget Committee for the Government of Vanuatu to meet the full cost of the project over a two year period. Upon the submission of the first payment in 2015, the project will commence in January 2016 and will take over 20 months to complete.

The ASYCUDA (Automated SYstem for CUstoms DAta) software, used by over 90 Customs Administrations around the World, was developed by the United Nations Conference for Trade and Development (UNCTAD). An earlier version of ASYCUDA called ASYCUDA++ was implemented in Vanuatu in 1999. After more than 15 years of implementation, Vanuatu Customs has been able to implement the major functionalities of ASYCUDA++ and has proven to be successful in delivering suitable automated support to Customs and its external stakeholders in the Country.

However, ASYCUDA++ is a DOS based program with ICT limitations and therefore obsolete in this day and age. UNCTAD has therefore developed a web-based version of ASYCUDA known as ASYCUDA World. It takes advantage of the significant progress made in the field of ICT to provide improved automated support to the evolving requirements of both the Trading Community and Customs administrations.

64 countries in the World are currently using ASYCUDA World. They include the Pacific countries of Samoa, Fiji and Solomon Islands who have successfully gone live in 2014 and 2015. Meanwhile the ASYCUDA World project has been launched in Papua New Guinea while other countries in the region have also shown interest in the system. Unlike Solomon Islands, the projects of the other three Pacific countries have been fully paid for by their own Governments. Vanuatu Customs is therefore pleased that the Government of Vanuatu has also taken this similar direction to fully fund the project in Vanuatu. Customs believes that such level of commitment by the Government will ensure full ownership of the project and guarantees a successful completion.

Besides the reform and modernization which the project will bring about to Customs and the Trading Community, the system has a few advantages such as improving revenue collection for the Government, efficient collection of trade statistics, complying with international standards, and establishing the platform for the Single Window concept in Vanuatu, including single points of payment.

For Customs, the introduction of the system would mean reduced risk of fraud, more flexible and secure deployment of automation, electronic interfacing with systems from private & public sectors, more cost effective maintenance, and opportunity to streamline, improve and automate existing and new Customs processes.

Finally, the introduction of ASYCYDA World would be of great benefit to the Trading Community (Imports, Exporters and Shipping & Airline Agents) in the sense that it would facilitate trade, provide easier web-based access to Customs automated system, allow for electronic interfacing, enhance security and flexibility for remote lodgment and consultation, increase transparency through availability of decisions and regulations, and improve user-friendliness.