This Handbook provides a summary explanation of the qualification provisions, certification requirements, documents specified to be used to certify origin, and designated certifying authorities for each of the trade agreements of which Vanuatu is a member or a beneficiary, with cross-references to the manuals or reference documents published for these agreements.

Specific focus has been given to areas of uncertainty, confusion, lack of understanding of the provisions, import requirements and export opportunities of the various agreements on the part of importers, exporters, Customs brokers and Freight forwarders, as identified in the course of interviews conducted with private sector stakeholders in Port Vila and Santo during the project to support the development of rules of origin procedures and rules of origin capacity building in Vanuatu.

Click on the image to view the Rules of Origin Handbook.

The “wholly produced " criterion applies mainly to "natural " products and to goods made entirely from them, so that goods containing any parts or materials imported or of undetermined origin are generally excluded from its field of application. The "substantial transformation" criterion can be expressed by a number of different methods and mechanisms of application.

Click on the image to view the Rules of Origin Compendium. 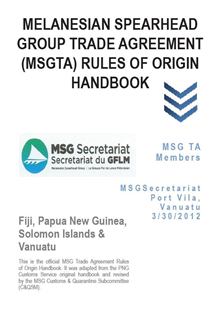 Reference is made in this section to the Melanesian Spearhead Group Trade Agreement (MSGTA) Rules of Origin Handbook, published by the MSG Secretariat, as a source of further information and elaboration.

Click on the image to view the MSGTA Rules of Origin Handbook.

The content of this article is published through a project on the Support to the Development of Rules of Origin Capacity Building which is funded by the European Union and implemented by ACE International Consultants.