On the 23rd of June 2018 the Honorable Minister for Finance, and Economic Management, Hon. Gaetan Pikioune (MP), signed the Convention on Mutual Administrative Assistance in tax matters.

The signing was done in Paris while travelling to Brussels to deposit the instrument of accession to the International Convention on the Simplification and Harmonization of Customs Procedures (Revised Kyoto Convention (RKC) on the 30th of June 2018.

This Convention is a key step forward for Vanuatu as a member of the Organisation of Economic Corporation and Development (OECD) Global Forum on Exchange of Information for Tax purposes (the Global Forum).

The Minister of Finance signed the Convention at the office of the Secretary General of the OECD in Paris, (France).  The Convention is expected to come into effect in July 2018. 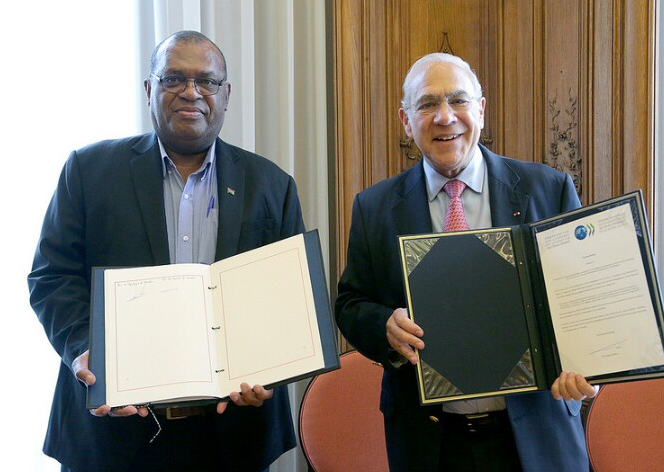 The benefits of signing the Convention are significant for a developing nation like Vanuatu. The benefits include:

The Minister explained that “signing the Convention is an important step forward for Vanuatu. It will allow Vanuatu to meet its obligations to help fight global tax evasion”.

On the 30th of June 2018 at the 132nd annual session of the World Customs Organization (WCO) council meeting in Brussels Belgium, the Hon. Gaetan Pikioune Minister of Finance and Economic Management presented to the WCO Secretary General (Dr. Kunio Mikuriya), Vanuatu’s instrument of accession to the International Convention on the Simplification and Harmonization of Customs Procedures (Revised Kyoto Convention (RKC). With the deposition of the accession instrument by the Hon. Minister, Vanuatu becomes the 115th contracting party to this convention. Vanuatu Customs administration (in particular) as a contracting party to the RKC, now has a binding commitment to adopt the governing principles of this convention usually refer to as the international best practise to effectively facilitate legitimate trade across our border.

The International Convention on the Simplification and Harmonization of Customs procedures (Kyoto Convention) entered into force in 1974 and was revised and updated to ensure that it meets the current demands of governments and international trade globally.

The WCO Council adopted the revised Kyoto Convention in June 1999 as the blueprint for modern and efficient Customs procedures in the 21st century. Once implemented widely, it will provide international commerce with the predictability and efficiency that modern trade requires. The revised Kyoto Convention elaborates several key governing principles, paramount among these are the principles of:

The revised Kyoto Convention promotes trade facilitation and effective controls through its legal provisions that detail the application of simple yet efficient procedures. The revised Convention also contains new and obligatory rules for its application which all Contracting Parties must accept without reservation.

The revised Kyoto Convention entered into force on February 3, 2006.

Delegation accompanying the Hon Minister to deposit the instrument of accession to the RKC.

By signing the Convention and meeting WTO standards, Vanuatu is demonstrating that it can and will meet world’s best practice in both taxation and customs administration.  The Minister thanked all the officials that have worked hard to ensure Vanuatu was able to take these important steps.

Finally, the Minister urged all Government Ministries to work together to ensure that Vanuatu fully meets its obligations under both Conventions.